As Seen on TEDx

Non-Force Farming; Touching the Earth for Healing and Connection

30 Mar Non-Force Farming; Touching the Earth for Healing and Connection

Posted at 15:42h in Health by networkbackadmin 3 Comments
Share

Don’t miss Glenn’s free Zoom presentation (link to sign up below) on the wonder and magic of Non-Force Farming!

The Parallels between Non Force Farming and Non-Force Chiropractic are Amazing!

When I first met Glenn and found out he had been recently hired to run the Littleton Community Farm and help to restore the natural soil ecosystem on this already organic farm through what he called Non-Force Farming I was very excited to learn that there was a Non-Force way of working with the earth just like we worked with the body. I was looking for an opportunity to learn more about soil ecology and gardening, and I wanted to get my hands in the earth as a part of my own healing path. I wanted to nurture something that I could watch grow and develop that would then nurture me back. The ultimate cycle of love and life.

Dr. Barry and I recently spent a couple of hours with Glenn, and his wife and farming partner Claire, at the greenhouse where seedlings are being sprouted now in preparation for planting when the land is prepared and the season is right. We assisted in gently planting seeds for a variety of tomato plants into the silky, light soil in starter trays. We left feeling happy and renewed and connected to the earth and those seeds, and we planned to return in three weeks to help transplant them into larger trays on their journey to becoming a creation by Mother Nature which can nourish us all.

At the start of the pandemic last spring, I like many people had a great urge to have a backyard vegetable garden for the first time.

I instinctively knew that working with the earth and plants would be a healing counterbalance for the stress and trauma brought on by all the fear, unknowns and isolation of the pandemic. It turned out that Glenn was first drawn to farming for this reason many years ago, by an instinctive knowing that this was what he needed to help him heal from stresses and traumas in his own past.

He teamed up with a friend who had a farm in Oregon and began to learn how to work with the land.

He learned about the Gaia theory, which sees the earth as one living interdependent ecosystem, just like a living being in the way that all of our cells and organs work together along with the microbiome community that inhabit us. He learned about the microbiome of the soil and the interdependent relationship of the plants, fungi, worms, insects and a multitude of microorganisms.

He learned about how traditional farming practices, even those on “Organic” farms, like tilling and running tractors over the land disrupt the ecosystem of the earth and create layers of compressed and compacted soil that worms, root and water have difficulty moving through. The farm he worked on in Oregon had revivified the soil to such a degree that the porous consistency of healthy soil had been restored (which takes 5 -7 years) so that he could sink his hand straight down into the ground up to his forearm. Imagine trying that in your backyard in an area of bare earth.

He learned about the principles of Non-Force Farming and how to work with the natural impulses, structure and dynamics of the soil ecosystem, instead of against them, where honoring these relationships and rhythms is of primary importance and ultimately produces much healthier yields.

This is similar to our philosophy of working with the natural healing impulses of your body without trying to manipulate or force any release or change to take place.

The natural impulses of the Life Force whether it is in the human body, or the larger ecosystem we are all a part of, is the most intelligent and powerful force there is, and we have learned that the most effective way to heal is to align with the natural movement and unfolding that is already occurring. 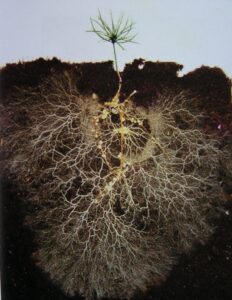 In this photo you can see the extensive root network below ground supporting this seedling on its journey to becoming a pine tree. What is not immediately obvious is that the seedlings roots actually consist of about five yellowish single roots and the white “root system” that you see is actually a network of Fungi which play a multitude of rolls in supporting the life of the plant in a symbiotic relationship that serves them both.

This Fungi acts like our Nervous System, sending and receiving messages and is also able to transport and share nutrients between plants. The plant in turn shares some of the sugar it makes through photosynthesis with a number of its partners living in the soil. This is a true expression of community.

This incredible fungal network which functions for the good of all involved, along with the worms and those microorganisms which are anaerobic, meaning that they do not use oxygen to make energy and need to be protected from air and light, are all disturbed and destroyed by traditional tilling.

Glenn has an incredible understanding of all of this and part of his mission is to share this knowledge with others in addition to running the farm, which itself is committed to community education. The farm has a CSA (Community Supported Agriculture, where you can buy a share at the beginning of the season and then receive the bounty of the harvest for the 20 week growing season) which it uses to fund the running of the farm, and also welcomes a network of volunteers who want to learn and work together to interacts with the earth and the plants as stewards and a support system.

Dr. Barry and I have eagerly signed up as volunteers for this season which begins sometime in May. I have decided that the community connection of working with others is as important for my healing as working with the earth so I am going to participate in the community farm rather than try and start my own garden this year.

I am also going to be working with Glenn to develop a blessing ceremony for the earth at the start of the growing season to create an experience of community not only with each other, but with the earth and all of the natural elements involved in the magical creation of a plant from a seed. I see this experience of connection and mutual respect as the central ingredient for saving and healing our planet and ultimately ourselves.

Glenn has created an amazing slideshow and educational presentation that he has shared some of with me. I was blown away by the images, the principles and the confirmation of how incredibly orchestrated the living soil/plant ecosystem really is. He is also interested in how we can use all of our senses to be in relationship with the plants and the earth. He is offering this as a Zoom presentation which will be on Tuesday April 27th 7:00 – 9:00 PM and Sunday May 2nd 3:00 – 5:00 PM, which is an incredible gift to the community, and if you are interested you can sign up here: https://secure.lglforms.com/form_engine/s/jcW7N7qLT_rvDRVPc0runA

Healing is really about reconnecting with our inner selves and our natural environment in a way that honors both.

This is the path we are committed to and are grateful and excited to have an opportunity to lay our hands on the earth with the same awareness and connection that we use with the people we are honored to care for in our office.

1. Life in the Soil, by James B. Nardi is a wonderful and accessible intro to the soil food web for gardeners.

2. Botany for Gardeners, by Bryan Capon is a good intro to the life processes of garden plants

3. The Market Gardener, by J.M. Fortier explains the farming techniques that we use

4. The One Straw Revolution, by Masanobu Fukuoka is an organic farming classic about nurturing rather than controlling nature.

Welcome to Our Practice

If you wish to receive alerts of our latest blog updates, please SIGN UP for our Newsletter.